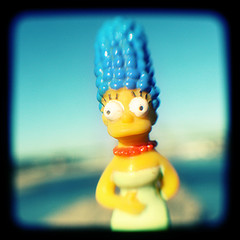 The Simpsons are in their 20th season and were recently renewed for another 2 seasons, helping them surpass Gunsmoke as the longest running, prime time television series.

I was surprised that they’ve been around for 20 years.  It really didn’t seem that long ago that the world was introduced to the wacky family from Springfield.  I am no Simpson’s expert or even passable trivia buff; but, I am a fan and in my fading recollections, the early episodes were dominated by a surlier Homer and bratty Bart.  In fact, much of the protesting about the Simpsons was about the violence between Homer and Bart and the naughtiness of Bart.  People predicted the downfall of the family and the eroding of our religious institutions.  But, the brillance of the Simpsons is that it is a cartoon filled with good neighbors, love of family, faith and kindness and it is painfully funny.

I particularly like Ralph and his odd little comments and Marge and Lisa’s unending well of goodness and faith in their fellow humans.  And I love the church signs and the occasional appearance of the Springfield Public Library.  One of my favorite scenes is when the Simpsons go to the public library’s book sale.  There is a banner that says:  Library Book Sale.  Yes, we have pornography! And this nugget from Homer:

A library selling books?  If I don’t want ’em for free, why would I want to pay for ’em?

This is the absurdity of the Simpson’s that is so brilliantly funny and thought provoking at the same time.  Any librarian that was around for Dr. Laura’s assault on libraries and the American Library Association, would find the Simpson’s subtle dig deeply satisfying.

I was musing on my last post about the mopefest it seems we have all been participating in, myself included and I realized that there are times when I turn to the Simpsons for comfort.  I don’t own a TV (not because of some highbrow ideas about the quality of television shows…simply because I can’t be trusted with one….i’d never get anything done.) and when I’m particularly bummed, I find myself watching Simpsons episodes on my laptop.

I’m instantly transported to Springfield.  My mood lifts.  Laughing is almost guaranteed and we all know how good laughing is for us.  Norman Cousins relieved himself of arthritis pain with doses of the Marx Brothers.  Harvard recently released a study that confirmed what we all kind of knew anyway–smiling is contagious.

You may not partake in the joy of Homer as i do; but, go find your own version of my Simpsons induced joy, laugh a little or a lot!  And pass it on.