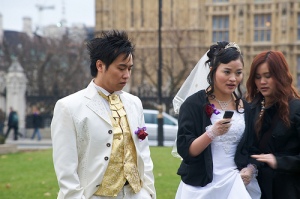 There is a fascinating article on the NYT site this morning about the etiquette of using your smart phone in meetings.  The article points out cases on each side of the argument where the use of a Blackberry helped and where it hindered the task at hand.

If I had 15 minutes with Malcolm Gladwell, I’d quiz him on just when the tipping point happened.  When did it become okay to txt, surf, fiddle with a gadget during a meeting, presentation, lecture, whatever?

One person in the article claims that the txt banter between people at a meeting loosens it up and add to the creative productivity.  Maybe this is true; but, it seems like there is a time and place for this sort of loosening and when someone else is speaking is probably not the time.  I also suspect that some of this banter is mean spirited and then I wonder what type of productivity, team building, working energy that could possibly be promoting.

All of this txting while your attention should be elsewhere is based on the misconception that we can multitask.  Multitasking is actually impossible.  Juggling: yes.  Multitasking: no.  Our brains are only capable of having one thought in each moment…the speed between those moments can be quite fast; but still: 1 thought per moment.  So, in the time it takes you to txt the guy sitting across the conference table from you, you have missed something.

Folks that txt while driving think their eyes only leave the road for a moment; but, in that moment so much can happen.

Giving your undivided attention to someone, to me, is a given.  Anything else and you are signaling that there are other things or people more important than that person in that moment.

I was surfing the web one day and came across an online discussion about whether it is okay to use your cell phone to talk or txt while conducting a retail transaction.  The comments were leaning towards yes and this deeply saddened me.  What could possibly be so important you can’t give the person waiting on you a short moment of your time?  And if it is that important, then perhaps you should step off line and give your full attention to the conversation.  The consensus seemed to be that it wasn’t rude.  What?  How can ignoring a person who most likely has spoken to you and/or is waiting on you not be rude?  I’m at a loss with that one.

But we need to be connected 24/7 to keep up.  My kids need me in case of an emergency.  I can do two things at once.  Ugh.  Really?  I think most people who are txting a million times a day, kids included, spend almost no time having a quiet reflective moment.  I also suspect these parent/kid emergencies are more likely about what a kid should have for lunch or other questions the kid should be answering on their own.  Now, I’m not a parent, so it’s easy for me to look in from the outside; but, I do like to gently remind parents that, yes, they can reach their kid anytime, anyplace; but, the other side of that is so can other people.  I remember riding a bus in Minneapolis and overhearing a conversation between a teen girl and her boyfriend.  The whole purpose of the call was for him to keep track of her whereabouts.  She gave him a minute by minute run down of where she was and where she was going and what she was doing.  Hmmm.  Not sure about you; but, I definitely would not want anyone keeping tabs on my child like that.

But, I’ve gotten slightly off topic.  I’m a bit of an evangelist about this:  BE PRESENT in your life.  Talk to the barista who pours your coffee; thank the person who pumps your gas; refrain from txting and talking while you’re interacting with another human being.  There are times when it’s appropriate to engage in these activities and preceding them with a warning and an apology go a long way in maintaining  a respectful interaction.

And in case you were wondering or suspect that I’m someone stuck behind the times or am waiting for retirement while I blame the younger generation for all of our society’s ills:  I’m 44.  I am the new technology librarian at my library.  I only own a cell phone (no landline) which is a smart phone (google phone).  I txt.  I have a laptop and wireless high speed (Fios) internet access at home.  There are things I love about technology.  I just think we need to remember that there is a time and a place and in person, human to human interaction comes first.  Pretty sure that on my death bed, I won’t be wishing I spent more time on the internet.

Error: Twitter did not respond. Please wait a few minutes and refresh this page.