While attending a workshop at NJLA’s annual conference this year, I noticed a small stuffed lion seated between me and the woman to my right.  The workshop presenter had us do a few little exercises with our seat mates.  We introduced our selves and shared the usual bits of information: where do you work?  Where do you live?  I learned her name is Jenna Galley and she works at the Peapack-Gladstone Library.  As the workshop wrapped up and people began making the typical noises of opening bags and rustling papers, I glanced one more time at the little golden colored stuffed lion seated next to me.  Jenna was preparing to leave, when I finally just had to ask.

“What’s up with the lion?” And she answered,

She proceeded to tell me a little bit about Leona and how she travels with Jenna to events and conferences and has her picture taken with authors.  I could have left it there, I suppose; but, I just had to know more.  I basically ended up slightly interrogating her about Leona and people’s reactions to Leona.  Jenna enjoys sharing the story of Leona with the people they meet; so, I don’t think I hassled her too much.  The best news is that she agreed to a bit more interviewing for this article.

It all started at PLA 2004 in Seattle.  Jenna attended a Between the Lions luncheon.  Between the Lions is a PBS kid’s show that uses puppets and storytelling to promote reading.  In doing a bit of research for this article, I discovered that it was created and designed out of existing research on how children learn to read and they expanded that research with their own studies.  Jenna was impressed with the Between the Lions people and became fascinated with the puppets, puppeteers and one puppet in particular: Leona, one of the stars of the show.  PLA was in the Spring of that year and the following Fall, one of Jenna’s colleagues gave her a gift: a small stuffed version of the character Jenna  had fallen in love with back at PLA.

It all kind of started out innocently.  Leona started accompanying Jenna to events and meetings, having her picture taken doing silly stuff and it was a fun thing for her coworkers to joke about.  Encouraged by a colleague, Jenna took Leona to PLA 2006.  The idea of having Leona pose for pictures with some of the authors took hold and the adventure began.  Soon the pile of pictures of Leona and authors started piling up and people started to expect to see Leona at the conferences. 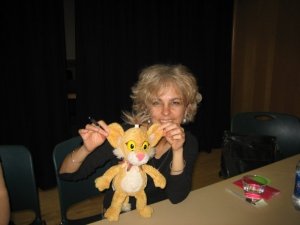 When Jenna’s mother found herself in the hospital, Leona took time from her schedule to keep Jenna’s mom company and even with this break, the number of photos of Leona and her author friends is pretty substantial.  Leona has not only become a part of Jenna’s work family; but, she goes home with Jenna and has been welcomed as a member of that family too!

I loved meeting Jenna and her pal Leona and I love the doors that Leona has opened for Jenna.  Leona is an instant ice breaker and has helped make introductions to folks Jenna may not have ever met: authors, other librarians and probably random strangers too.

When I asked Jenna if she had experienced any negative feedback, maybe folks would just think a grown woman carting around a stuffed animal is weird, she said that she had always been a little quirky so it didn’t really matter.  Even the one cranky author has become a story to tell because really, how can you not smile when posing with Leona!

I’m a believer  that the meaningful, even if brief connection we can make with others is where joy lies.  There is such magic to be found in connecting with others and connecting with nature and in that magic there is a chance to experience joy.  I love that moment when a smile forms on my face because I just connected with another person.  Leona is a smile maker.  I’m sure Jenna would say that Leona has enriched her life in surprising ways.

Leona with the real McDuff (aka Sophie), star of Rosemary Wells's books