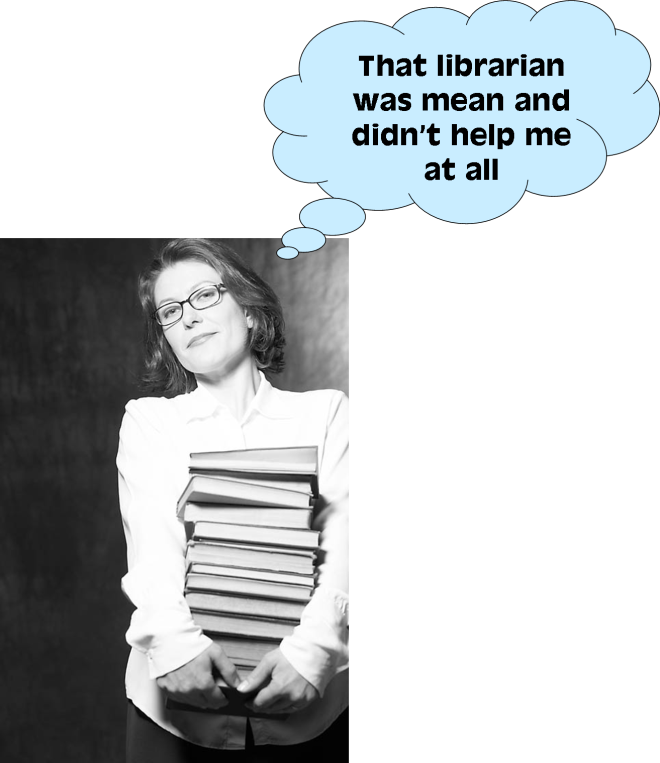 If someone wants help finding articles on a topic and I help them, but make them feel bad about it, they won’t feel like they got help. It won’t matter if they leave with a stack of articles and an armload of books that are perfect for them. If I’m a jerk, that’s all they’ll remember. Kate Sheehan in the preceding post.

This is one of the points in my interview with Kate Sheehan that particularly struck me.  It really is that simple.  It works the opposite way too.  If you’ve been nice and were helpful, even if you don’t have exactly what they need or the answer they were looking for, they still leave having a positive experience.

It’s not just important to appear helpful.  It’s important to BE helpful.  Sometimes, it’s easy to just say, “No, we don’t have it.” And be done.  But, it is the next step that can win the hearts of customers.  “No, we don’t have it; but, I can see if it is available through ILL.”  or “No, we don’t have that particular item; but, could I suggest something else along similar lines?”  This is the type of question that builds rapport because it takes the interaction from “do you have?” / “no we don’t” to a conversation and hopefully the patron leaves the library with something that interests them.

There is something about brief human interactions with strangers that is just an ingredient in the happiness soup and I don’t think it’s just me and my high level of social behavior.  I think most people would enjoy a few sentences between themselves and the folks they interact with during the day.  When I shop at Whole Foods, I always look for this one particular cashier because he will generally strike up a conversation about anything.  Once, we had a quite lengthy discussion about kid’s breakfast cereals.  And I loved that.  It is less drudgery to spin through his aisle with my groceries, have a pleasant and brief chat and then head home.  And I must admit that this adds to my Whole Foods loyalty.  I am a frugal person; but, will spend a bit more for quality food and pleasant experience because it adds to my quality of life.

When I lived in the Twin Cities, I frequented two grocery stores: a co-op and a small independent, local chain called Kowalski’s.  Both were pricier than the two big box grocers; but, I went to them partly for their product selection but mostly for the experience.  If you’ve been reading my blog then you know about my big dramatic accident.  While still in a wheelchair, I went to Kowalski’s and the front end manager came running up to me to chat with me about what happened.  I did not know this person other than to exchange some pleasantries as she checked me out.  Yet, here she was showing concern, letting me know that she cared and offering to help me if I needed it.

In Saint Paul, before I worked for the library system, I was a regular patron and the check out staff got to know me for my many holds and regular visits.  My partner used to tease me that it was like Cheers because I would walk in and one of the clerks would catch me, “Ann, you have some holds!”  Or they would ask me about something we had chatted about previously.  “How’s the scarf coming along?” after I picked up a hold on knitting and exchanged project tales with one of the clerks.  But, I liked that.  I liked that I had a relationship with these folks and this little branch library.

It really does not take much to build this rapport: a few extra seconds or a couple of minutes.  Sometimes I know we are rushed and crazy; but, slow down a wee bit, acknowledge the person, make sure you have HELPED them.  It makes all the difference in the world.

Error: Twitter did not respond. Please wait a few minutes and refresh this page.